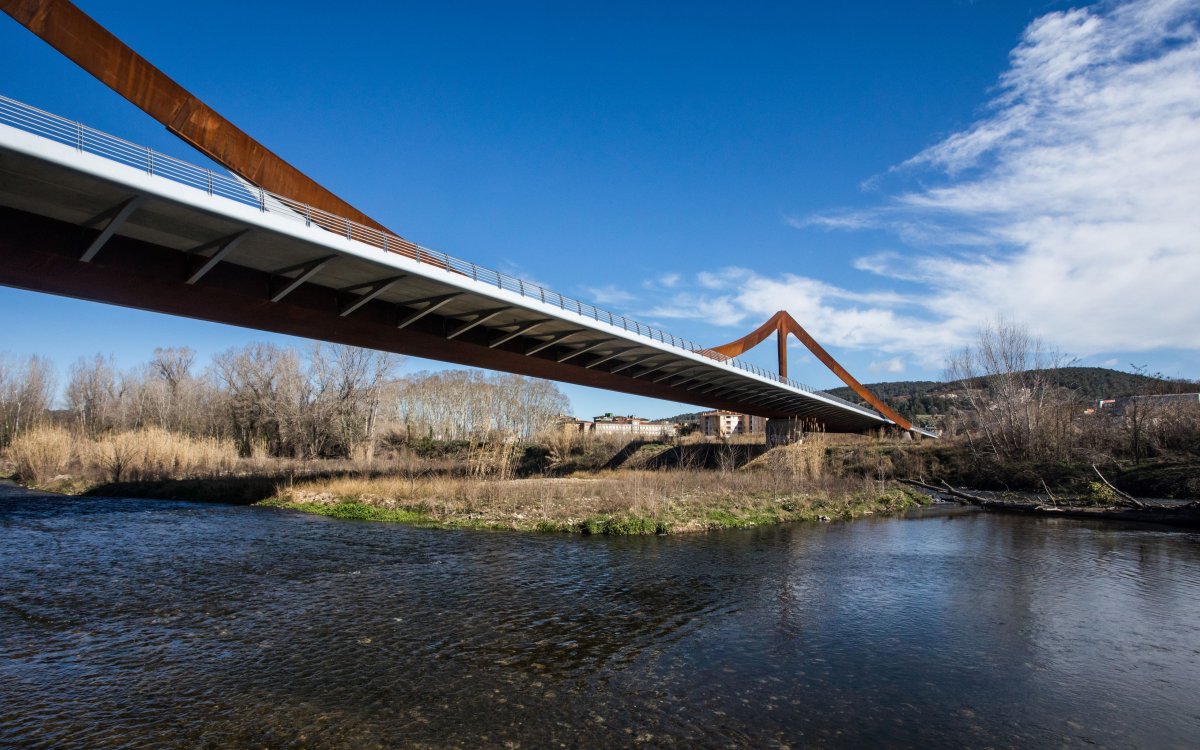 Viaduct over the Ter River

This bridge over the Ter River in Girona was conceived as a new entrance to the city which has proved to ease traffic since it was opened in 2015. The importance and prominence of the bridge site demanded a structure that was sensitive to the urban landscape, so the major concern in the design process was the balance of cost, aesthetics and structural efficiency.

A new innovative concept was developed for this purpose: a visually attractive steel structure with pure forms and slender components. The bridge has a total nine spans with a continuous deck for an overall length of 485 m. A long main span of 120 m, necessary due to the protected nature of the riverbanks, is achieved by suspending the deck in the central part from a curved tied steel member between two pylons. This central curved member splits into two branches over the two adjacent spans and creates two visual gateways.

The deck is 19.9 m wide and accommodates four traffic lanes, a central median and two sidewalks for pedestrians. It has a constant depth of 2.1 m with a steel-composite box for the three central spans and a post-tensioned concrete box girder for the approaches. The steel box is transversally stiffened every 4 m and a concrete slab on the bottom flange increases the ductility over the supports. The piers at both ends of the curved steel member are composed of two inclined shafts, whereas the rest consist of a single vertical shaft.

All piers and abutments were founded on deep piles socketed into the rock below the alluvial deposits. The steel girder was assembled and welded on site from 20 segments while resting on temporary supports, which themselves rested on micropiles. The curved steel member was then constructed in a similar way, while being supported on the deck.  The use of steel in the section over the river was important in minimizing the impact on the environment. The remaining six spans were built with the span by span method using traditional falsework.